The questions we get asked most often revolve around the confusion between hemp and marijuana.  It’s natural. They look very similar, and people use the word “cannabis” interchangeably between the two, but having a bit of knowledge gives you a massive advantage. Understanding the difference allows you to easily access reliable and legal cannabis for tremendous wellness benefits, like Charlotte’s Web whole-plant cannabinoid hemp oil extract without the high and the hassle.

Some common questions about hemp vs. marijuana:

They both get you high, right? No.

Marijuana is cannabis, but hemp isn’t? No.

Hemp and marijuana are both elevated in THC? No.

You need a medical marijuana card to get them? No. 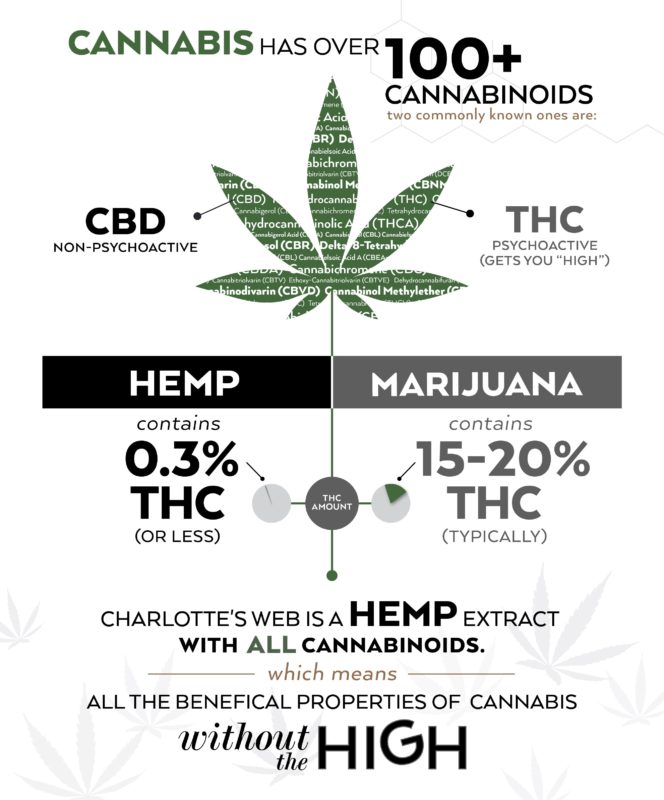 Let’s shed some light on these incredible and controversial plants. For those wanting the short version:

For the more detailed explanation, cannabis is the plant genus for both hemp and marijuana and played a critical role in humankind’s industry and health for thousands of years. Ancient societies widely and wisely used cannabis for a variety of wellness and industrial applications.

Even though we’ve seen millions of people benefit from cannabis and the laws are changing faster than ever; unfortunately, some of today’s society still carries a stigma about cannabis. Clearly, this stigma is unwarranted.  Even the US government is aware of the many benefits of cannabis, having encouraged farmers to grow cannabis for industrial use during World War II’s “Hemp for Victory” campaign [1].  Later, they patented “cannabinoids as antioxidants and neuroprotectants.” US Patent 6630507 [2] outlines the specific potential for stroke, brain trauma, Alzheimer’s and other conditions.

The Dark Years Of Cannabis

So, what changed? Why were we suddenly taught to believe cannabis is the devil’s plant – capable of killing brain cells and making us crazed, immoral losers?

Conspiracy factualists may point out this demonization conveniently worked in the favor of the powerful Mellon and DuPont families. The same families who bankrolled support for the cannabis prohibition act of 1937. They and other influential elites were looking to exert more control over the paper, textile, fuel and pharmaceutical industries which hemp farmers threatened.

Regardless, the demonization of this plant only began in the mid 20th century, which was a huge about-face after centuries of productive use. Furthermore, while the plant contains over 100 different cannabinoids [3], the smear campaign targeted the only one that results in a psychoactive “high”: Tetrahydrocannabinol or THC.

The Fundamental Difference In Hemp vs. Marijuana Finally Arrives

In 2014, the US Farm Bill [4] officially classified cannabis plants containing a maximum of 0.3% THC as “Industrial Hemp” (and all other cannabis as “marijuana”).  This means that 99.7% of the cannabinoids present in hemp will not get you high.

While not perfect, the 2014 Farm Bill was landmark legislation and made it possible to cultivate hemp using modern agriculture processes and to ship beneficial hemp products across state lines. Most importantly, it makes available cannabinoids’ natural health benefits for millions of people who need them, but don’t want to feel high.

Despite dozens of companies ignoring the law, the FDA has said that products labeled as “CBD” cannot be legally sold across state lines in the United States [5]. This is due to evolving medical regulations and quality concerns.  The FDA recently tested 20 “CBD” products [6] and found that nearly half of them contained zero CBD, while most of the others had near meaningless levels of CBD, and several contained toxic contamination.

After the Farm Bill and rigorous testing by the Colorado Department of Agriculture, Charlotte’s Web was officially classified as “hemp” and began shipping to all states. Despite media coverage, “CBD” has never been an accurate description of Charlotte’s Web. It’s always been a whole-plant hemp extract oil that contains all beneficial cannabinoids, not a single-compound product.

Lastly, now that you know the differences between hemp and marijuana, we recommend that you always seek quality and consistent whole-plant cannabinoids for optimal wellbeing.

While world-class genetics are the foundation of Charlotte’s Web, quality is in the details. The unmatched care that goes into the production of Charlotte’s Web products is overseen entirely by the Stanley Brothers from cloning, hand-planting, organically growing on US family farms, and manufacturing in an FDA certified facility with 3rd party verified Good Manufacturing Practices. No one else does this!

Don’t be shy about asking this and more in the comments below and check out our FAQs page too!

2 The United States of America as represented by the Department of Health and Human Services. “Cannabinoids as antioxidants and neuroprotectants.” Patent 6,630,507. 7 Oct 2003.

3 Ben Amar, Mohamed. “Cannabinoids in medicine: A review of their therapeutic potential.” Journal of Ethnopharmacology, 105, 2006, 1-25.